The famous aerospace manufacturer and space transportation services company of Hawthorne, California, Space Exploration Technologies Corp., a.k.a SpaceX, will have a third drone ship among its arsenal to receive returning ships and rocket fairings. The third drone ship will take the name of the promised ‘A Short Fall of Gravitas’ from the famous sci-fi novel series, Culture, of the late author, Iain Banks.

SpaceX’s eccentric Chief Executive Officer, Elon Musk, proudly announces on Twitter the new drone ship that will join its predecessors in retrieving the reusable ships of the company that directs itself to the oceans for the company to utilize again. These ships are responsible for ‘pick-up’ the company’s returning spacecraft.

SpaceX prides itself for its reusable ships, the Dragon and the Falcon, both of whom have successfully brought payloads and passengers to the cosmic heaves and returned to the surface for reuse. Reusable spacecraft are a viable innovation of the company, reducing the cost of manufacturing and helps reduce the waste. 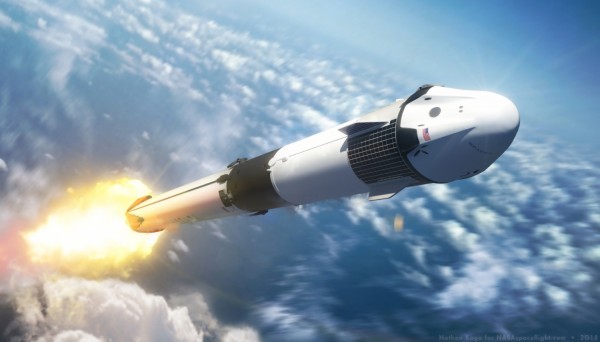 Reusable or returning spacecraft can now be controlled and commanded to drop back to the oceans with direction and specialized thrusters to descent. SpaceX’s technology directs the successful mission spacecraft to its catchers, the drone ships, both situated in the massive oceans of the world, the Pacific and the Atlantic.

Currently, the Pacific ocean houses the youngest drone ship in the company, Of Course I Still Love You (OCISLY) while the Atlantic freely floats the first ship known as “Just Read the Instructions” (JRTI). Both are nods to the famous author, Iain Banks’ sci-fi novel series, Culture, published from 1987 to 2012.

ALSO READ: Cineworld Staff Felt ‘Betrayed’ Upon Learning Temporary Closure of Nearly 700 Cinemas in US and UK First in the Media

The leader and CEO of SpaceX, Elon Musk, recently announced on Twitter that the new drone ship would be called ‘A Short Fall of Gravitas,’ which highly suggest and hints that the public might see it soon. Musk is known to drop cryptic statements on his Twitter account; however, this one time, he was direct to the point.

The remaining days of 2020 and the up and coming 2021, will have SpaceX fly numerous missions with both cargo and distinguished passengers, the astronauts. The addition of a third drone ship will help Elon Musk and SpaceX to coordinate its ships and alternate its usage. This third addition will be advantageous for SpaceX as several unexpected occurrences show up out of nowhere. Several Twitter users speculate whether this new drone ship will be used for SpaceX’s Falcon Heavy and its 3-core drone ship landing. The Falcon Heavy and several of Dragon XL missions have its spacecraft in massive sizes, thus returning with more parts, requiring more drone ships to receive them.

A Short Fall of Gravitas will soon grace the oceans of the world, awaiting the return of SpaceX’s distinguished reusable ships to be collected by the company and prep for another mission. The reusable function of the spacecraft is a manifestation of Elon Musk’s dedication for a cleaner planet, same as to Tesla’s vision and ideals.

Thu Oct 22 , 2020
Facebook now tags a 2015 COVID-19 Test Patent report, suggesting that the ongoing pandemic was already planned before it appeared, as fake news. Richard A. Rothschild is the one behind the false conspiracy.(Photo : Photo by Dan Kitwood/Getty Images)In this photo illustration the Social networking site Facebook is displayed on […]